Part two of the Winter 2016 camping trip was the Arroyo Tapiado Mud Caves in Anza Borrego State Park. This is one of my favorite spots to explore in Anza Borrego. One of the main reasons for that is you can really get some solitude. Only street-legal vehicles are allowed in this part of the park, so you do not have to worry about dirt bikes or quads tearing through the area.

Note: Putting Arroyo Tapiado Mud Caves into Google maps and having it route you works perfectly. It even navigates you very well on the dirt road portions. Also, the trail is sandy and has some spots where high clearance vehicles are preferred. We drove out there in two F-150s and a Subaru Crosstrek with no difficulty. We saw a Honda Oddessy on the trail as well. We were very surprised by that and would not recommend that, but hey someone did it.

When we made it to the Arroyo Tapiado, wash and saw our first sign of a cave we parked the truck and ran for it. We were at Bat Canyon looking to find Cool Cave. Before leaving for the trip, I loaded my GPS up with the routes of all the caves. I found the GPS download here GPS data for cave entrances. Some of the caves are much easier to see than others from the main wash so having them on GPS made them easier to find, and also we were able to put a name to the canyons and caves we were exploring.

As we made our way through Bat Canyon, we quickly spotted the cool cave. When I hear the word cave what often comes to mind is a big pitch-black open space. For some reason, I think it is big opens spaces. Cool Cave is the exact opposite. It is a cave that you must basically shuffle your entire way, though. I have never been a fan of tight spaces, and this one was on the smaller side. I went back probably only 40 feet while Charlie went about 60 feet back into the cave. He did not see an end. 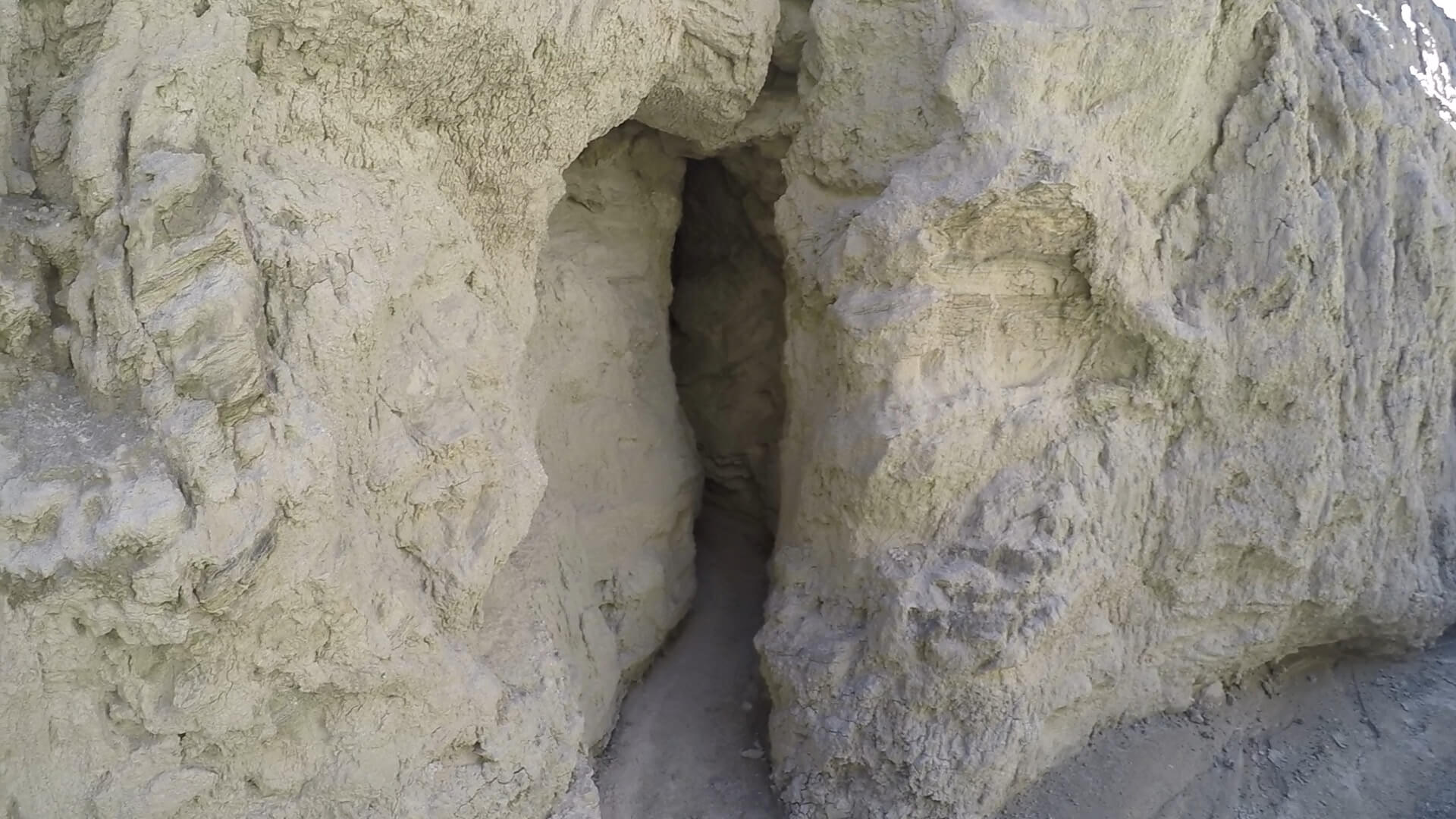 I know I was at the mud caves so I should be prepared to go in some small caves but damn this one was just a little too tight. The first thing I noticed though upon entering the cave was the drop in temperature. The caves are much cooler than outside in the open desert. It makes for a nice escape from the direct sun beating on you in the desert.

After making it back to the cars, we decided we would set up camp before exploring anymore. The last time we made a trip to the mud caves in 2013 we chose a camping spot far down the wash away from most of the caves. We had chosen that spot last time because it was a busy time and most other good spots had been taken. This time there was almost no one on the wash, but we still decided to camp ways down. We liked the idea of being away from everyone and having a spot all to ourselves.

Our campsite just before sunset

After setting up camp our friend who we were waiting for quickly joined us. It was getting into late afternoon at this point, and sunset was just about 2 hours away. We had to make a decision if we wanted to quickly jump back into our vehicles and explore some caves or finalize camp set up and play some games around camp. We opted for the later and begin finished setting up camp.

The first thing I decided to do was set up the model rockets to be launched. No one else in the group has had much experience with model rockets so when I said I would get this tiny balsa wood rocket up 1000 feet in the sky everyone looked at me like that would never happen. I loaded up the rocket and strapped in the biggest engine I had with me a C6-7. So 6 seconds of thrust then 7 seconds of delay before the pop and parachute comes out.

This was our first rocket launch of the day, and it did not seem too windy well at least no wind on the ground. So we pointed the launchpad straight in the air and hoped for the best. Bummer the darn battery launchers were dead. Seems old batteries were left in the launchers and had created some nasty corrosion. After a little bit of moping around camp, I got to thinking we would not be able to launch any rockets. I thought to myself "we don't need the launcher, all it does is send electricity down the wires." So I ripped the wires out of the "safe" battery launcher stripped the ends of the wires and grabbed a 9-volt battery I had brought along.

WOOOOOOSHHHH!!!! That rocket took off well as well a rocket. It kept going, going, then went some more and then....gone. The faint black speck in the sky seemed to have disappeared. There is no way of telling but that rocket must have gone at least a 1000 feet up if not more. Our calculations on pointing the launch pad were a little bit off. It went FAR towards the West. There was no way that the rocket was going to be found.

I brought a handful of rockets, so we still had plenty to play with. We some of the heavier cardboard and plastic rockets. Still with big engines but because they were so much heavier they did not go as high meaning we actually could see them float back down to earth and retrieve them. I think our best idea though was nighttime rocket launches. We strapped a few glow stick bracelets to one of the larger rockets and let it fly. It landed surprisingly close to camp and was retrieved in minutes. 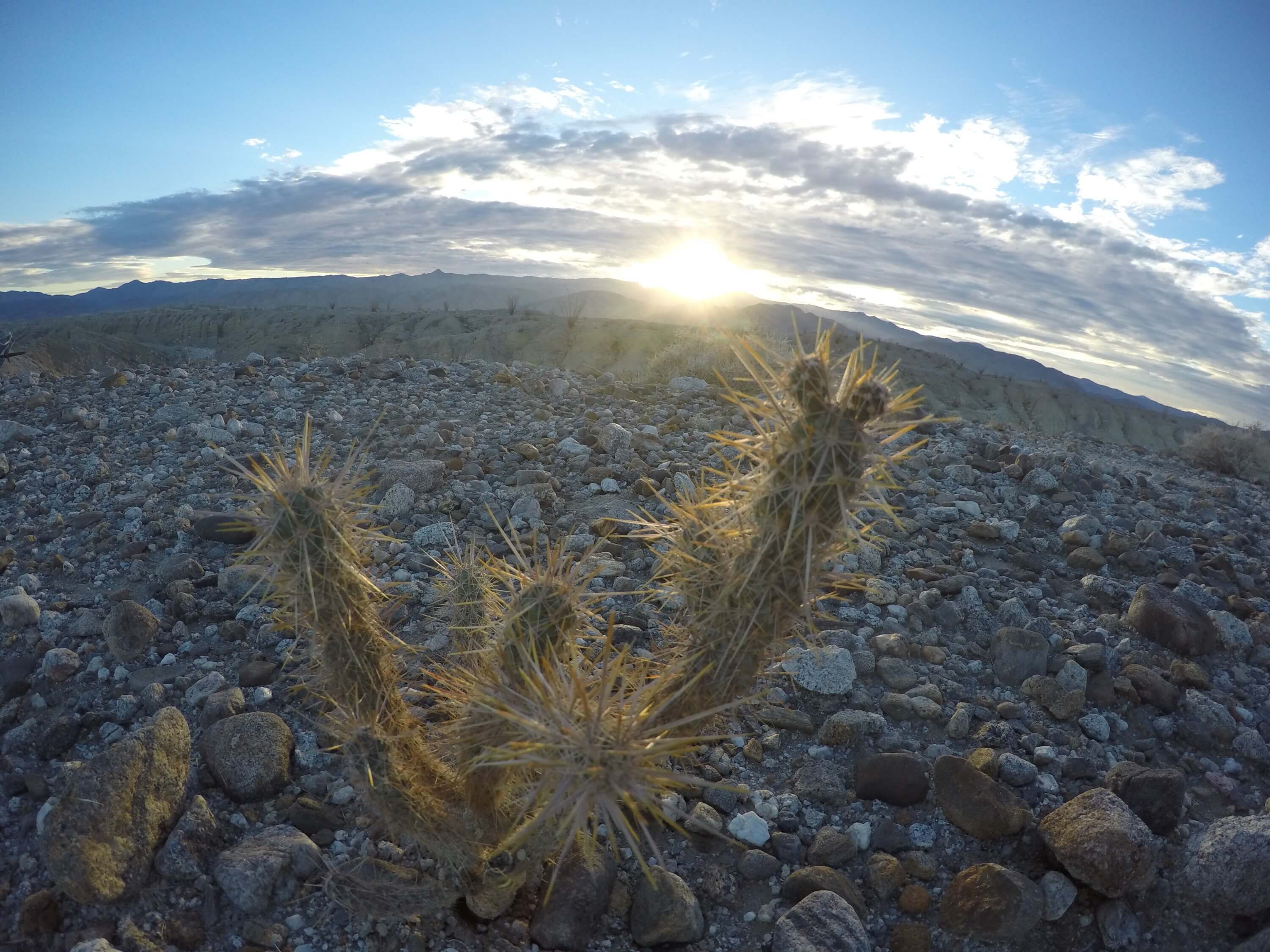 Evenings and nighttime in the desert are some of the best. As the sun goes down everything gets much quieter then the night comes to life! It gets so much darker in the desert bringing the night sky to life. Nighttime also means big fires and hanging out talking with good friends. We spent our night warming up next to the campfire exchanging stories and looking up at the night sky enjoying the stars. I had purchased this great used washing machine drum off someone who had welded legs to it. Above ground, campfires are required in Anza Borrego State Park, and this was perfect. A large number of holes in the drum meant high airflow for the fire. 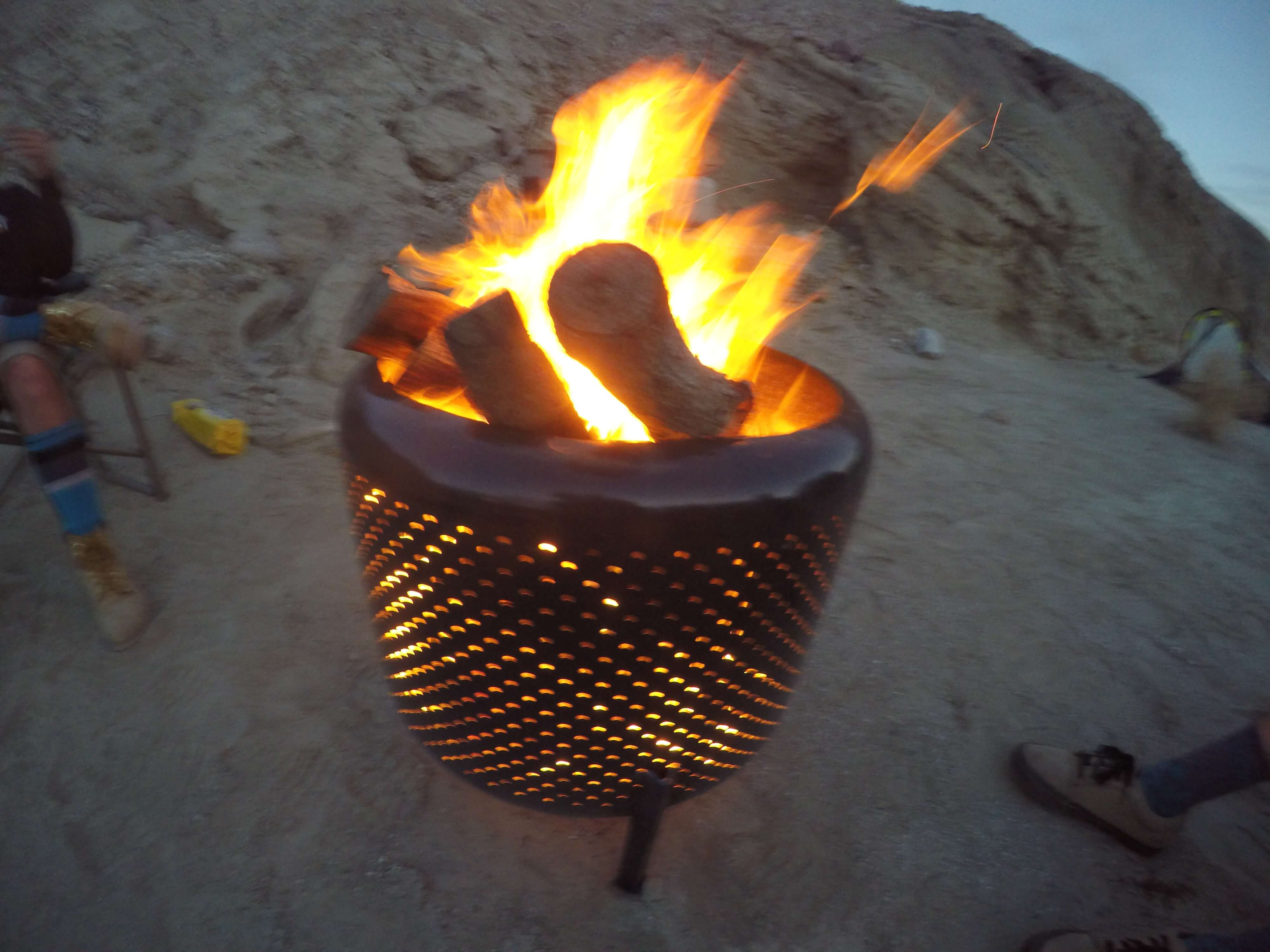 At nightfall, we decided to go for a night offroading trip. We had not gone any further into the wash than our campsite. We decided a trip further up the wash was in order. We hopped in our trucks and made our way up. Our buddy with a light bar in front made for easy riding. We went at maybe 2 or 3 miles further up the wash until it got a little tight for the trucks. Maneuvering the turns and corners was possible but getting back out if we went too far was a little bit of a mystery. We decided to head back and get back to our warm fire.

Once it came time for bed I was excited. I got to sleep on my cot out in the open. All I had to do was open my eyes and I had the milky way shining above me. Little scary when I would hear rustling sounds around me but I made it through the night. Having a 5F degree sleeping bag kept me more than toasty throughout the night.

We all woke up early and well-rested. The clean desert air makes for great sleep. Weather reports had stated it may rain today so we wanted an early start to hopefully be able to explore a bit before any major rain started. Nothing worse than being in a cave formed by rain while it is raining.

We headed down the wash and found Blind Cave. We did not know what to expect but started our way through. This cave was a little wider than Cool Cave but not by much. We pressed on. We pushed forward to what felt like maybe 150 to 200 feet into the cave. It is very difficult to determine how far you have gone in when you have no perspective of anything else. But after not too long we saw a light at the end of the cave. We crawled out the hole and found ourselves in a low point surrounded by 30-foot mud hills. All the water must collect in this spot and go down the hole forming the cave. We crawled back in the hole and made our way back. Seemed shorter on the way back, that always seems to be the case though.

We were able to do a little more exploring that day. Going down a few canyons. We went through Big Mud Cave which seemed to be more of a canyon rather than a cave. The canyon had some covered wall spots but still, nothing too cave-like. While hiking through Big Mud Cave though it began to rain. Our trip was cut a little short due to the rain. We were in canyons and caves where rain runs and camped in a wash where the rain runs. All signs pointed to we should get the hell out of here.

We had not torn down camp before leaving to explore the caves so in the rain we quickly dismantled everything and threw it all into our vehicles. It was a little saddening having to leave so quickly and rush to get out of there. It was a beautiful park with tons of exploring left undone.

We will be going back to the mud caves again!

Things to bring/plan for when going to the mud caves

You've made it this far,
How about reaching out on Twitter @ThomasJDesmond or LinkedIn!!